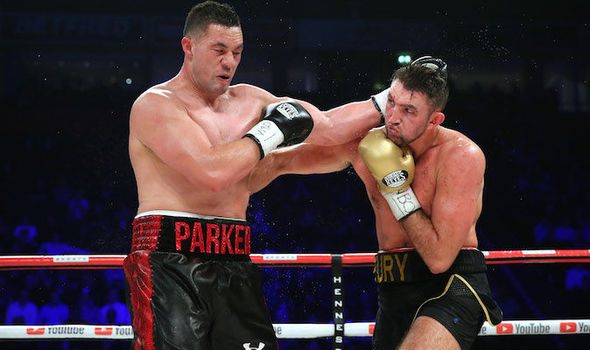 Fury (20-0, 10 KOs), 22, of England, who is the first cousin of former heavyweight world champion Tyson Fury, was supposed to travel to Parker’s home country of New Zealand to fight him on May 6 after Parker’s team won the purse bid. However, Fury pulled out of the fight on just two weeks’ notice, citing a lower back injury that kept him from training. Instead, Parker (23-0, 18 KOs), 25, took on late substitute Razvan Cojanu and won a lopsided decision via scores of 119-108, 117-110 and 117-110.

Frank Warren, Fury’s promoter, announced on Thursday that he had added Fury to his card on July 8 at the Copper Box Arena in London, where he will face an opponent to be determined in a tune-up bout for the world title shot on Sept. 23. Parker and his trainer, Kevin Barry, plan to be ringside.

Parker, who has fought primarily in New Zealand, but also has fought in the United States, Germany and Samoa, will be fighting in the United Kingdom for the first time. Parker said he has no problem going to Fury’s hometown to defend his crown.

“The idea of going to the U.K. is something I am looking forward to and, no, I don’t hold any grudges,” Parker said, referring to Fury’s withdrawal from the fight in May that was supposed to be in New Zealand. “I just go in there, respect my opponent and do what I have to do. That’s go in there and win the fight and defend my title and keep it here [in New Zealand]. The crowd against me? I will use it as energy and motivation to put on a great show and fight hard.

“I know there will be a lot of supporters for [Fury] but I know I [will] put on a great show, and hopefully get him out of there.”

Fury has not faced close to the caliber of competition that he will against Parker. He has also been out of the ring since winning a seventh-round technical decision against journeyman Fred Kassi in April 2016, but said he was very confident of lifting the title from Parker.

“I’ve never had a close fight. I’ve won every round of every single fight,” Fury said. “I’m going to let my fists do the talking and I’m going to take his belt home with me.”

Parker won a majority decision over Andy Ruiz Jr. in December in New Zealand to claim one of the world titles vacated by troubled Tyson Fury. Now Hughie Fury will have a chance to bring it back to the family.

“[Fury] needs to get this warm-up fight out of the way before he faces Parker later in the year,” Warren said. “I am confident that the WBO heavyweight belt will once again be in possession of the Fury family come the end of the year.”